Siena! already its name evokes sweetness, mystery, adventure. It is certainly one of the most loved and admired cities by tourists. Many remain enchanted from the first glance. But beautiful Siena hides many secrets and a passionate and strong character that is only revealed to attentive visitors. Enter with an open heart and as the inscription on the Camollia door says, Siena opens its own “Cor magis tibi Sena pandit”. 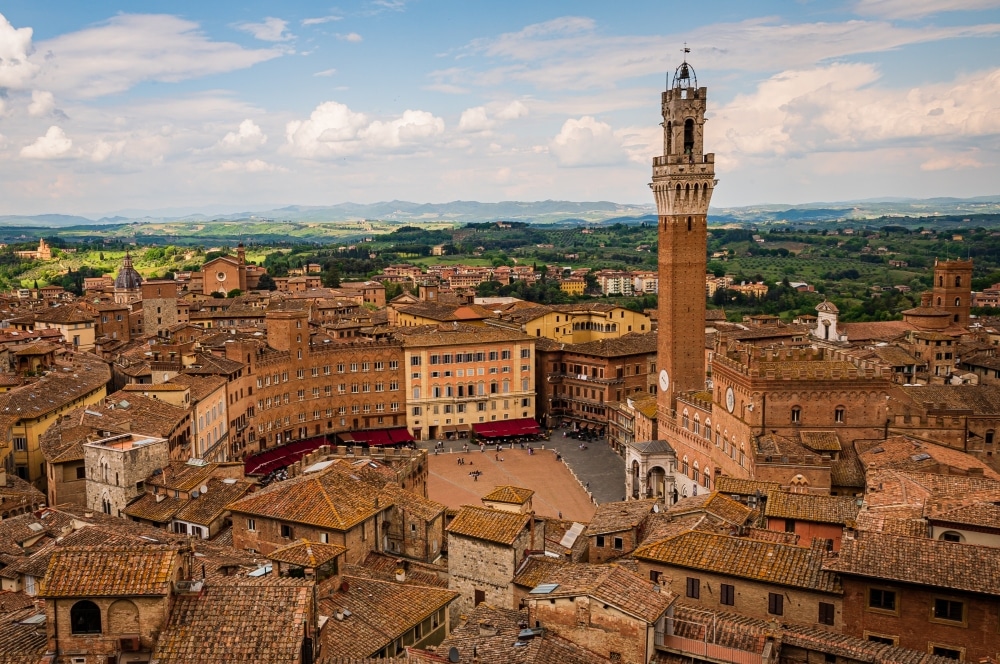 I started working as a tour guide in Florence, but it is Siena that I prefer to show to tourists. Why do you ask?

First of all, as you probably already know, it is a city that has preserved its centuries-old tradition of the Palio, the horse race that has been held for centuries in the Piazza del Campo. The race is part of the daily life of the inhabitants and is lived as the most important event of the year.
The name of the Palio derives from the Latin “pallium”, the thin cloth cape that was offered as a symbolic prize to the winners. The race is traditionally held twice a year, on July 2 and August 16, and sees 10 contrade (districts) out of the 17 that the city has.
The contrade were born a long time ago as military companies, but today they maintain their existence only to prepare the horse race. Each contrada has its own name, symbol, administrative headquarters, museum, oratory, stable and fountain. Many traditions and festivals take place in each contrada during the year.
The Palio show attracts many spectators, and if you are in good health and have a lot of have a lot of patience, the participation in the Piazza del Campo is free. But this is not a race designed for tourists and its various rules and details may be incomprehensible to most.

Siena, back to the Middle Ages.

Another wonderful fact about Siena is its almost intact medieval appearance. The city was very rich and important in the Middle Ages and what we visit today is a testament to its glory days. When Florence conquered Siena in the middle of the 16th century, it shut down the development of the city. No matter how you arrive in Siena, you can see a panorama of the city perched on its hills, with its red tiles, sloping roofs, rapid descents and clear blue sky.

The Cathedral of Santa Maria Assunta in Siena.

The city also has one of the most beautiful cathedrals in the world. Inside is the most magnificent “carpet” of marble and stone in the world and the church houses frescoes by Pinturicchio, works by Donatello, Michelangelo and Gian Lorenzo Bernini, to name only the best known. The cathedral is completed by the baptistery, the crypt and the cathedral museum which contains priceless treasures of medieval and Renaissance art.
So many saints and blessed were born in Siena, the spiritual side must have been
particularly important here. The most famous is St. Catherine whose relics are kept in a beautiful chapel in the Basilica of San Domenico. You can also visit the house of the saint, now a sanctuary, decorated by various Sienese artists.
The crucifix of Pisa, in front of which the saint received the stigmata, is kept there.

Palazzo Pubblico with its high Torre del Mangia. Observe how life slows down here and how your heart fills with silence. This square is still the living room of the Sienese, who meet here in the evening for an aperitif or after dinner, to chat and toast the new day.

Culinary specialties of the Siena region.

The restaurants of Siena invite you to taste their pasta: “pici” with different sauces, the most famous of which are “aglione” – tomatoes and garlic and wild boar stew.
Pecorino cheese and various cured meats abound, including those of Cinta Senese, a breed of pig raised only in the Siena area. The wine is robust, the red Chianti or Nobile di Montalcino and Montepulciano that accompanies the tasty dishes. Sienese desserts, panforte and ricciarelli, are sweet, spicy, with nuts, candied fruits, honey.
In the surrounding area, too, you can’t get bored: the thermal baths of Saturnia and Rapolano, villages such as Pienza and Montepulciano, the Romanesque abbey of San Galgano, hiking, biking, wine tasting, and hiking, biking, wine tasting…. There is something for everyone.

I invite you to visit Siena, and if you need a guide, I am here!